HOW TRADITIONAL ACADEMIC EDUCATION WAS KILLED!

No Way ESEA!
How Corporations Profit from Hyped Up Education Crises

"Pearson wields enormous influence over American education.
It writes the textbooks and tests that drive instruction
in public schools across the nation."
POLITICO reported on Stephanie Simon's article "No profit left behind: In the high-stakes world of American education, Pearson makes money even when its results don’t measure up," February 10, 2015. POLITICO's Morning Edition summarized the article:

THE RISE OF PEARSON: PROMISES AND PROFITS: The British publishing giant Pearson wields enormous influence over American education. But Pearson's dominance does not always serve students or taxpayers well. A POLITICO investigation has found that the company stands to make tens of millions in taxpayer dollars and cuts in student tuition from deals arranged without competitive bids in states from Florida to Texas. Pearson's contracts set forth specific performance targets - but don't penalize the company when it fails to meet those standards. And in the higher ed realm, the contracts give Pearson extensive access to personal student data, with few constraints on how it is used.

Below is a summary from the article itself:
The above quotation, divulges the formula for making profits and changing law. Take the questionable negative statistics (early 1980s) on education, hype them up using the A Nation at Risk report to the American people, get Americans on board by convincing them the crisis is real, and then go on to impose an alien Outcomes- Performance- Results-Based Skinnerian system (necessary for School-To-Work) on the nation's schools, which also includes  all components of the tax-funded school "choice" and charter school (under unelected boards) agenda, which ultimately destroys public and private education, all for the purpose of imposing a corporate (Fascist/Socialist/Communist) lifelong workforce training system in the USA. 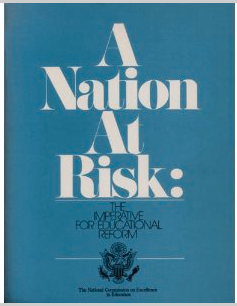 Which is exactly what we are looking at today under Senator Lamar Alexander's Reauthorization of the Elementary and Secondary Education Act, now aptly called the Every Child Ready for College or Career Act of 2015.

The A Nation at Risk agenda was just one of the many disastrous education efforts which came out of the Office of Educational Research and Improvement in which I worked. I was not directly involved in the A Nation at Risk meetings, but I was aware of what the report would be used to accomplish. As Senior Policy Advisor, I wrote a letter to the late Russell Kirk's wife explaining my concerns. (Mrs. Kirk  was one of people, a former teacher, who served on the panel which drafted the report.) I received a reply from her to effect I did not know what I was talking about.

The following Gerald W. Bracey article, "Farsighted or Foolish? The 20th Anniversary of Nation at Risk," from the April 2003 issue of Phi Delta Kappan is so important.  It explains how the Reagan Administration Department of Education, under the late Secretary T. H. Bell, used the Hegelian dialectic to bring about the neoconservatives' so-called reform, the reform we are looking at today and which is enshrined in Senator Alexander' Reauthorization of the ESEA!  Create the problem (A Nation at Risk), get people to scream, and then impose the awful solution. Here is what Bracey exposed about the A Nation at Risk report:


During the years after the publication of A Nation at Risk, critics of the schools not only hyped the alleged bad news but also deliberately suppressed good news—or ignored it when they couldn't actually suppress it. The most egregious example was the suppression of the Sandia Report. Assembled in 1990 by engineers at Sandia National Laboratories in Albuquerque, the report presented 78 pages of graphs and tables and 78 pages of text to explain them. It concluded that, while there were many problems in public education, there was no systemwide crisis….

Alas, we must recognize that good news about public schools serves no one's reform agenda—even if it does make teachers, students, parents, and administrators feel a little better. Conservatives want vouchers and tuition tax credits; liberals want more resources for schools; free marketers want to privatize the schools and make money; fundamentalists want to teach religion and not worry about the First Amendment; Catholic schools want to stanch their student hemorrhage; and home schooling advocates want just that. All groups believe that they will improve their chances of getting what they want if they pummel the publics.

It has been 20 years since A Nation at Risk appeared. It was false then and is false now. Today, the laments are old and tired. "Test Scores Lag as School Spending Soars" trumpeted the headline of a 2002 press release from the American Legislative Exchange Council. Ho hum. The various special interest groups in education need another treatise to rally round. And now they have one. It's called No Child Left Behind. It's a weapon of mass destruction, and the target is the public school system. Today, our public schools are truly at risk.

Posted by Charlotte Iserbyt at 8:44 AM